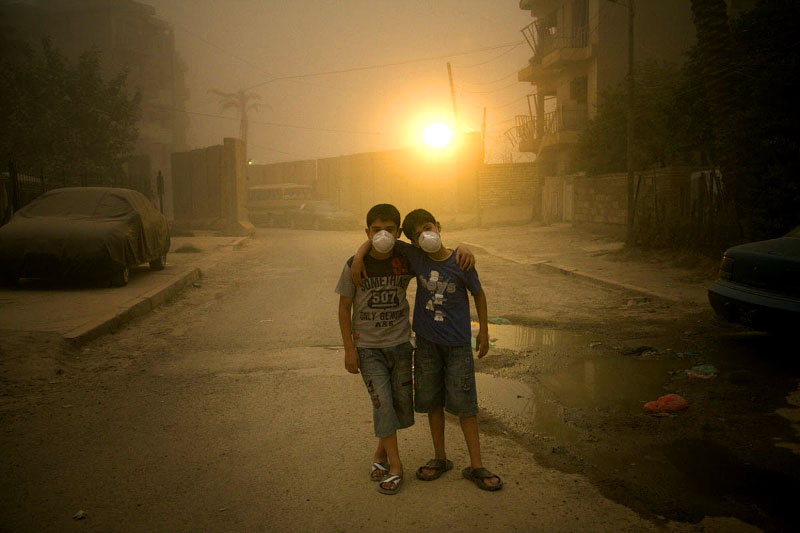 The Best of Buddies, Amid Dust and Danger, May 2008


The dust smells like chalk. Heavy and still, the air is orange-tinted. Breathable until it hits your chest, causing a stuttering cough.

In the Karrada neighborhood of Baghdad, Hussein Abbas, 10, and Zaid Alaa, 12, head first to a pharmacy for surgical masks. Cousins, but more like brothers. Inseparable best friends, looking for any opportunity to go outside, even during dust storms.

Kicking rocks and avoiding puddles of sewage, they have been sent to find a nurse who lives in an apartment a few blocks away. Zaid's sister is sick with the flu and needs medicine.

At a maze-like checkpoint for cars, an Iraqi guard ruffles Zaid's dust-grayed hair. From there, the boys can see an abandoned house with balconies torn like twisted metal combs. Three years ago, the windows in Hussein's home were shattered by the force of two suicide bombs that exploded, minutes apart, a few houses down from where he lives.

Zaid lived in a different neighborhood at the time. A Sunni group took his home, he says, and now his family lives here in Karrada, a largely Shiite neighborhood. The move was a good thing, Hussein says. His cousin is now his neighbor.

Farther down their cluttered, dead-end street, they pass through a tunnel of blast walls. In adrenaline-rushed voices, Zaid and Hussein brag about their favorite players on Iraq's national soccer team, Younis Mahmoud and Hawar Mulla Mohammed.

The street is brown, even without the dust. Trash provides the only color. The storm is getting worse. In 10 steps, people disappear into the thickening air.

The boys approach the apartment building and realize the streetlights are on. Their skinny legs begin to move faster, up the steps. Hussein's parents have rules, strictly enforced since the double bombing. They must stay in the neighborhood, never walk alone and always come home before dark.